--The meeting was called to order at 6:30 by president Joseph Klingelhutz, who introduced the club officers. He then asked for attendees to introduce themselves and tell a bit about their bee experience. It appears to have been a good season for the bees, with a stronger than usual fall flow. Randy Hahn brought samples to share of early and late season honey.

Wilbur Collins spoke of a woman who lives between Cedar Rapids and Mt. Vernon who has bees in need of a cut-out and Floyd Otdoerfer spoke with a local person who is giving away three live colonies of bees.

--Jim Davis indicated the Iowa Honey Producers Association annual conference will be in Ames this year, November 11th and 12th. Several very good speakers are scheduled over the two days of the conference. James Miller indicated he would go and present at our December meeting. The mentor program was also mentioned for anyone who wished to sign up.

--Rachel Vakulich gave a summary of her recent experiences as our honey princess, and she has been quite busy over the summer. She asked the group for any information about presentation opportunities, which she very much enjoys. She will again be vying for the role of Iowa Honey Queen at the annual conference. Good luck, Rachel! 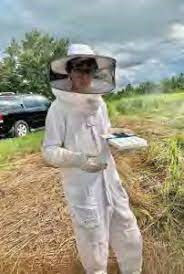 at Orlando Science School, a STEM school in Orlando, Florida. Atreya spoke with us via Google Meet. His topic was the small hive beetle (SHB) and his research over the past several years on the control of the beetle, which has in recent years made its presence known in the midwest, though it is a more serious threat in the southern half of the United States. Several club members commented on their experience with the beetle though none appear to have lost colonies to the insect.

The following is a summary of his talk:

SHB’s originated out of sub-Saharan Africa and appeared in the US in the late 1990’s. They are small, dark beetles, 4 to 6 mm long, that hide in crevices and avoid the light.

As with wax moths, it is the larva that do the damage in the colony, which includes damaging wax capping and spoiling the honey, damage to comb and stress on the colony.

Evidence of small hive beetle damage includes a rotting citrus odor and run-out of honey from the hive. Unlike wax moth larvae, which produce cocoons and webbing across the frames, SHB larvae will cause “slimeout”. The larvae are significantly smaller than wax moth larvae.

Good practices include removing old frames and boxes which can provide cracks and areas for the beetles to hide and lay eggs, extracting honey within two days of removal from the hive to prevent spoilage, and exposing the hive to sunlight as the beetles don’t tolerate the sun and heat well.

Treatments include chemical and organic/biological methods. Products such as Checkmite+ are available for purchase but may have deleterious affects on the environment and the bees as well. Other methods for control (and Atreya emphasized the SMB cannot be eliminated from the colony, only controlled) include beetle traps using an attractant such as apple cider vineager and oil to kill the beetle, diatomaceous earth and nematodes. These methods do not harm the environment nor the bees and are typically much less costly.

Atreya then described his research to determine the most effective substance to use in beetle traps. Comparing cider vineager, beer, mango/cantalope puree with boric acid, ACV, peanut/grapeseed oil and yeast, he found that beer was significantly more effective than the rest. He then proceeded to do tests to determine what substances in beer were the most important in attracting the beetles. An oil blend with beer proved the be the most effective, and work continues to find a way to produce this. While this is not available, it’s clear that using beer with an oil in a SHB trap can be an effective method for keeping the beetle population under control, when combined with other good practice as mentioned above.

Atreya then addressed several questions from the group. Thanks, Atreya, for a fine presentation. He will be giving an online address at the IHPA annual conference.

--Joseph began a conversation about fall varoa mite treatment. Randy Hahn demonstrated a vaporizer for oxalic acid that works very quickly, using a rechargeable battery (Milwaukee brand or DeWalt). A treatment can be applied to a colony in only 30 seconds, compared with 15 minutes in a vaporizer attached to a 12 volt battery.

The meeting was ended shortly after 8 pm, with some time for members to socialize.

Thanks again to Rob McCain and Urban Acres for letting us use the facility.

Next meeting is December 12th.

Please note: If you have not attended a meeting or paid dues the past two years, this will be the last delivery from the club. You can still follow activities on the web and facebook,

Dues may be sent to our treasurer. Dues are $20 per household annually. Dues may be paid in person at any quarterly meeting or by check to: Jean Stallman; 11247 Scotch Grove Lane; Fairfax, Iowa 52228

Do you have some unwanted bees on your property? Instead of calling for the exterminator, consider instead having a member of the East Central Iowa Beekeepers help rid you of your problem. You don't have to worry about the bees and a beekeeper gets the bees--it's a Win-Win!

For more information about swarms and to find someone to help remove your swarm, select the link to Got Swarms? on the right sidebar.

Are you a new beekeeper? Would you like to have an experienced beekeeper work with you to help you get started in what can be at times an overwhelming experience? If so, check out our Classes and Events page by clicking on that link on the right sidebar.

Join our club's Facebook group. Search for "East Central Iowa Beekeepers" This is a public group you can join. Share your ideas, questions and what you're doing with your bees.